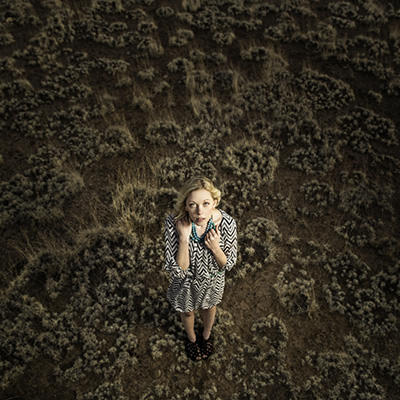 Though we are primarily wedding photographers, we always enjoy being able to photograph people outside of weddings. When we got the call to work with Brianna we we quickly able to get her scheduled and once we found out she wanted to shoot in Seligman, Arizona (a place we had been wanting to shoot for years) we were very excited.

With the usual springtime wind in the region finally cooperating for a day, we set out with Brianna and her mother for the hour drive with some deep conversation, some laughs, and a little bit of adventure along the way. Initially we had planned on shooting in the plains around the town, but quickly realized the mixture of vintage buildings and empty streets were far too good to not shoot as our backdrops!

Brianna – being a bit of a fashionista – brought some fantastic outfits that were befitting the theme of the shoot, so we were really able to tie it all together and give it a period-correct vibe in the city, and a very trendy vibe to the stuff we shot out in the high-desert plains outside of town.

An hour or so in, Brianna’s mom was kind enough to run and grab us all some amazing food from (what turned out to be) a sensational restaurant called Westide Lilo’s Cafe! We grabbed our burgers and headed off to the fields to wrap the shoot and were able to not only eat, but get the shoot finished just as the sun set behind the distant mountains.

It was a fantastic shoot, and we are so glad to have met Brianna and her mother, and we can’t wait to work with her again someday! We also got to play with our fantastic MagMods!!! Enjoy the images everyone!